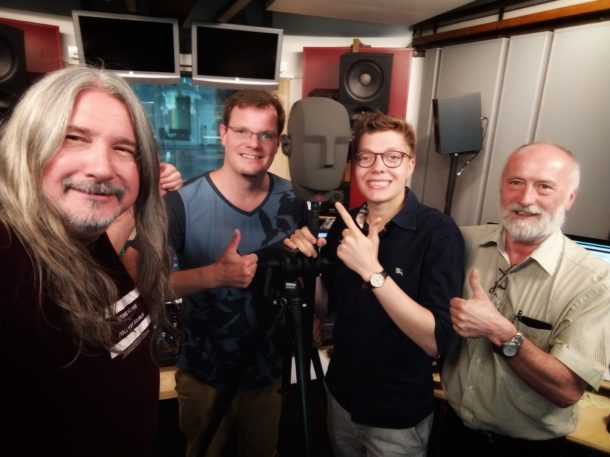 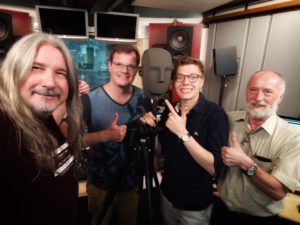 Basking in the success of a fantastic recording session, with (from left) Matthew Lien, engineer Matthias Kronsteiner, Alois Mühlbacher and Sigi Pilgerstorfer.

Hello everyone! As work on my ground-breaking binaural album “Full Circle” continues, I was very excited to record the renowned counter-tenor Alois Mühlbacher in Studio Weinberg, located within the castle walls of the fabulous Schloss Weinberg in Upper Austria.

In his earlier years, Alois was the starring lead voice of the acclaimed Boys Choir of the Monastery of Saint Augustine’s Order at St. Florian, near Linz, Austria. In his adult life, he remains a recognized voice and rising star in Europe’s classical music scene. 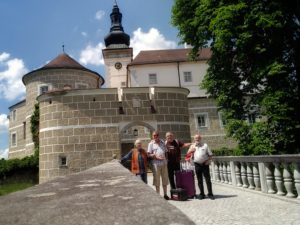 Matthew with mother Britta, and friend Rudi and Sigi, at the castle gatres.

I’ve known Alois and his family through my connection with the scenic mountain village of Hinterstoder in Upper Austria, and have long admired his musical abilities. It was a thrill to compose music especially for Alois’s range and quality, and to record his vocal performance in binaural in Castle Weinberg. 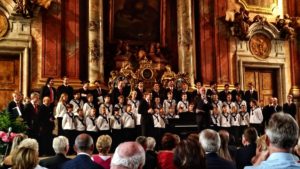 Alois and the Boys Choir of Stifft St. Florian

My good friend and technical coordinator for many of my Austrian binaural adventures, Siegfried Pilgerstorfer, helped identify the studio for this recording and it proved an excellent venue for its acoustics, its quality gear and capable technicians such as session engineer Matthias Kronsteiner, and for its amazing ambience as one of Austria’s most scenic castles. 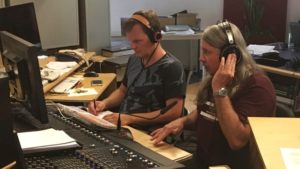 Matthew at the recording console with engineer Matthias Kronsteiner.

This recording of Alois will be featured in three bridge sections of a new song, and will be further affected by applying the binaural Impulse Response (acoustic fingerprint) captured in the Marble Hall of Stifft St. Florian (as seen and heard in the YouTube video, Audio Reality – An Introduction to Binaural Sound and Space). This will not only sound incredibly spacious on earphones, but it’s also symbolic because Stifft St. Florian is where Alois trained since childhood and developed his remarkable vocal abilities.