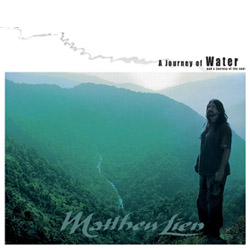 A Journey of Water

Copyright and Produced
by Matthew Lien and Wind Records Inc. 2005

Winner of the 2005 Golden Melody Award (Taiwan’s “Grammy” equivalent) for Best World Music Album, A Journey Of Water explores the nature and culture of Taiwan’s north-eastern Yi-lan Province, using water as the tour guide as it flows from the ancient Cypress rainforests of Nan-hu and Chi-lan Mountains, to the rolling misty tea fields among the foothills of Datong, across the plains of Lan Yang, and eventually out to sea resolving at an offshore underwater volcano.

Rich with a diversity of ecosystems and aboriginal and traditional cultures, the music and sounds of this region have been seamlessly blended into an epic journey which carries the listener through life and legend.

Over the course of two years, Matthew gathered countless hours of field recordings which have been edited into a complex interpretive and inspiring tapestry of composition and instrumentation. Because so many remarkable recordings were captured for this album project, a special bonus CD entitled The Water’s Sources is included, affording the listener the opportunity to enjoy these field recordings in their purest form.

When Yi-lan’s Magistrate challenged me to present this amazing region of Taiwan within a CD project, I was excited by the sheer multitude of inspiration found throughout this region. But I knew I would require some linear means to present these cultures and ecosystems, so as not to bewilder and overwhelm the listener.

Water is clearly an important element in Yi-lan (home to the largest OEM wetsuit manufacturer in the world), and it is flowing everywhere – literally. Not only does it pour in torrents from high mountain peaks to the plains below, but it is also running in a river of boiling water beneath Yi-lan’s thriving countryside – a river which surfaces in the renowned hot springs of Chiou-hsi and which terminates far off the eastern coast among the fissures of an underwater volcano at Turtle Mountain Island.

The challenges were not limited to the task of gathering recordings and performances from a variety of cultures and ecosystems which could be blended with studio recordings in the latter phase of the project, there was also the challenge of simply staying alive. With water as the central theme, it was ironic to have twice nearly drowned during the field recording phase of A Journey of Water; once while rescuing a reporter and an aboriginal child from a flash flood at the foot of a waterfall, and once while scuba diving to record the underwater volcano at Turtle Mountain Island – a process which required two custom-built hydrophones from DPA and a team of fellow divers working with me to record the violent gas and boiling water thundering from the vents on the ocean floor.

I have never been tasked with such a complex and interpretive project. So many cultures are celebrated here – Attayal, Kavalan, Hakka, Taiwanese (Hoklo), Beiguan, hunting, farming and fishing cultures – and so many natural environments – high mountain rain forests, the foothills and their shrouded tea fields, low lying plains and their peaceful rice and melon fields, and the rugged coastal and underwater habitat.

The awarding of A Journey Of Water as Best World Music Album in 2005 was not only recognition for what I feel was a massive undertaking, but was also well-deserved recognition for more than one hundred traditional and aboriginal musicians – not to mention the countless performers of nature’s orchestra.

I hope this project can fill your heart as it has mine, with the waters of a very special place in the world.