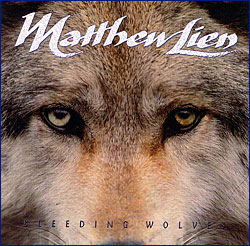 Copyright and Produced
by Matthew Lien 1995

Now Triple-Platinum in Taiwan!
“There is no trifling with nature; it is always true, grave and severe; it is always in the right, and the faults and errors fall to our share.” – Goethe

Bleeding Wolves is a collection of epic pieces full of texture and colour, which celebrate the beauty of nature, life and love. The title is both a reference to the Yukon government’s wolf kill program (euphemistically dubbed the “caribou enhancement program”) and a metaphor for some of the more cataclysmic dealings of humankind upon the natural world, which are reflected throughout the album with moving orchestrations.

Bleeding Wolves involved more than 30 musicians, with instrumentation ranging from piano, to Uilleann bagpipes, to wire harp, to orchestral and other instruments. Styles range from celtic (“Flying Squirrel Creek” and “Tears Over Shetland”), to European folk (“Before the War”), from world (“And Then There Were None”), to light jazz (“These Wings”), and from love songs (“Bressanone”) to classical (“Of Strength And Sorrow”).

The musicians on this album are of the highest calibre, including such renowned artists as Peter Sprague, Fred Benedetti, Bob Magnusson, and Mike Keneally. The album was recorded at Signature Sound in San Diego and mastered by Chris Bellman at Bernie Grundman Mastering.

“I had the matter of wolves deep in my heart. The Yukon government’s wolf kill program was in full swing, and Bleeding Wolves became an especially intense and, at times, painful effort for me. With the album’s recording completed, I embarked on a journey down the Yukon’s awe-inspiring Coal River. The Coal was to be the focus of that year’s annual Yukon Wildlands Project. Back home in Whitehorse, plans were being made for the Bleeding Wolves concert tour through Canada’s Maritimes. But for now, I was given the time to cleanse my sprit and mind by travelling through the powerful Coal River wilderness.

“It was about halfway through the two-week journey on a warm, sunny day. The river was calm as it moved toward the great canyon ahead. We had pulled off the river for lunch, onto an embankment about 10 metres wide. There stood the forest, thick and dark. We had just started to unpack the food containers when we heard what sounded like a cross between a howling ape and a great bird. It was loud, and it was right there in the trees, near us. The sound was so vocal, almost human-like, and we had no idea what it was. Then we spotted the shapes heading towards us from down river. Several wolves were loping casually along the riverbank, and they seemed just as curious about us as we were about them. The lead wolf, black and shimmering in the mid-day sun, stopped about 15 metres away and locked its gaze upon us. There we all stood, silent and unmoving with even time standing still, until someone slowly reached for a camera. As if to confirm that this shared moment was for the spirit and not the film, they all bounded into the trees that lined the riverbank. Not wanting this magical experience to end, I began howling, calling to them. And sure enough, they answered. The wolves and I carried on in conversation for awhile, as the others stood by listening. We were all caught in an eddy of enchantment.

“Soon the river trip was over, and I was off to begin the Bleeding Wolves concert tour. We would start the tour in a most appropriate community – Wolfville, Nova Scotia.”