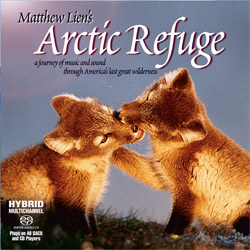 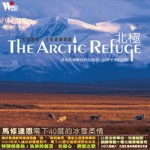 Arctic Refuge is an adventure of music and sound resulting from several expeditions to Alaska’s Arctic National Wildlife Refuge (ANWR) and the north-western Canadian range of the Porcupine River caribou herd which calve on the coastal plain of the refuge each year.

This 130,000-strong caribou herd annually completes what is considered to be the longest migration of any land animal on earth, to calve within a narrow strip of coastal plain – known as the “1002 Lands” – where 40,000 calves are born within a two week period.

Produced in both stereo and 5.1 surround sound, and released as a hybrid SACD (compatible with CD players), Arctic Refuge combines Matthew’s original music composition with his textural environmental recordings, all coming together in a masterful work which celebrates one of our earth’s miracles of renewal and which draws attention to the threat of oil and gas development currently facing this fragile ecosystem and the Gwich’in aboriginal culture.

I remember learning of the Arctic National Wildlife Refuge decades ago, for its natural wonders such as the migratory spectacle of the caribou and many migratory birds flying in from as far away as Antarctica. And it was also the threat of oil and gas development presented by multinational oil companies and pro-development conservatives in the United States government which kept this remote arctic habitat in the spotlight.

I could not have foreseen the degree to which this last remaining North American wilderness would change my life.

Back in 1996, while looking for another endangered wilderness to champion with our annual interpretive multimedia concerts known as the Yukon Wildlands Projects, my friend and fellow artist/adventurer Ken Madsen and I were both drawn to, and daunted by, the plight of the Arctic National Wildlife Refuge. For years this place had been a virtual battleground pitting aboriginal and environmental groups against rabid resource-hungry corporations and politicians.

Would we really be able to have much impact within such a monumental struggle?

After our first expedition to the Arctic Refuge, and continuing to work closely with Ken, the Caribou Commons Project (www.cariboucommons.com) was founded in 1998. This non-profit society was represented by a coalition of aboriginal and environmental representatives dedicated to securing permanent protection for the calving grounds within the Arctic National Wildlife Refuge.

Several expeditions and a decade later, the battle rages on.

Just as the caribou struggle through chest-deep snow and ice-choked rivers to arrive in the Arctic Refuge in time for calving – as they have done for tens-of-thousands of years – so also do we strive to inspire and educate Americans and Canadian alike. Our efforts have been manifested through live multimedia concert tours, speeches, photography, book publications, CD releases, and direct lobbying within the corridors of the US Congress.

Arctic Refuge is my attempt to tell the story of a wilderness and a natural wonder which must be protected for future generations.

Your purchasing of Arctic Refuge helps to support this effort. It is our hope that one day, the mere 200-day oil supply for the United States which lies beneath the coastal plain will no longer be considered valuable enough to justify the annihilation of a timeless ecosystem and the sacred connection which the Gwich’in share with this land.

Together, we will succeed.