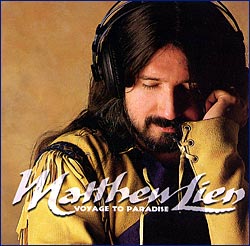 NOMINATED FOR BEST ALBUM OF THE YEAR
Taiwan ‘Grammy’ Awards 2000

Copyright and Produced
by Matthew Lien and Wind Records 1999

This album is Matthew’s interpretation of Taiwanese folk and aboriginal music, featuring performances by Taiwan’s leading traditional and aboriginal performers and the sounds of Taiwan’s environment.

Voyage To Paradise was recorded over the course of a year, during three trips to many of Taiwan’s remote regions. From the mountains and rivers of Kauhsiung County to the gentle plains of I-lan, and from the raging river of Toroko’s marble “living gorge” to the windswept island of Peng Hu, Voyage To Paradise is just that – a voyage through Taiwan’s natural wonders and diverse cultures. Recordings were captured in these and other remote locations and at Platinum Studio in Taipei. Final recording took place at Signature Sound, San Diego with mastering by Bernie Grundman.

Discover the magic of Taiwan. Voyage To Paradise will reveal to you a land of mystery, passion and surprising beauty.

Matthew Lien’s Voyage To Paradise is available in Asia through Wind Records and elsewhere through Whispering Willows Records.

“The surprising success of my music in Taiwan led me to want to give something back, so Wind Records and I created Voyage To Paradise. The process of becoming familiar with Taiwan’s traditions, its traditional music, its aboriginal culture, and its diverse and powerful natural environment would not have just a musical result; it would also build an unbreakable bond between me and this island nation.

“In September of 1999, both Voyage To Paradise and plans for an October concert tour were ready. Then calamity struck for the people of Taiwan. On September 21, the island was devastated by an earthquake that would claim thousands of victims and render tens of thousands homeless. Back home in the Yukon, the musicians and crew were unanimous in wanting to do something to help despite our feelings of helplessness. Through discussions with Ken Yang at Wind Records, we managed to change the focus of the CD release and tour into an earthquake benefit effort.

“With the support of the Yukon Government, and working closely with the Canadian Trade Office in Taipei, the album and tour were successful in raising both money and the spirits of the people. The main event in Taipei drew an audience of over 30,000, and together with proceeds from the CD, raised more than $600,000 for recovery efforts.”