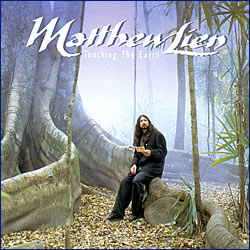 Copyright and Produced
by Matthew Lien and Wind Records 2000

Recorded in Asia, Central America and South America, Touching the Earth was produced and released in celebration of the 30th anniversary of Earth Day. The album makes an impassioned plea for the environment, carrying you on a musical journey through natural and cultural soundscapes from Ghana, Africa to the Mayan ruins of Tikal, Guatemala and from the Spanish countryside to aboriginal villages in the mountains of Taiwan.

Touching the Earth was recorded on location in many remote parts of the world, with instrumentation equally complex and diverse. It is a production of epic proportions, completed on 112 tracks (48 tracks analog and 64 tracks digital) at Signature Sound, San Diego and mastered by Bernie Grundman.

Matthew Lien’s Touching The Earth is available in Asia through Wind Records and elsewhere through Whispering Willows Records.

Matthew comments on his historic Earth Day concert in Taiwan: “I’ll never forget the press conference and a certain reporter’s unintentionally prophetic question, ‘What if it rains?’ The giant stage designed to accommodate an ensemble of 25 musicians from Taiwan, Canada and Ghana was set to go, television cameras and video screens were in place, as were the delay towers designed to keep the sound consistent across the square.

“My answer to the reporter’s question? ‘This is for Earth Day. Let it rain.’ And did it ever! It was such a memorable experience, performing for thousands of people in that torrential downpour that never let up, with spontaneous waterfalls dousing the musicians as the ceiling released what it could hold for only so long. The rain drenched the crowd, but it didn’t dampen their enthusiasm, and I was deeply moved when they demanded an encore. As one fan put it to me later, ‘It was as if the earth were sending down tears of joy.'”