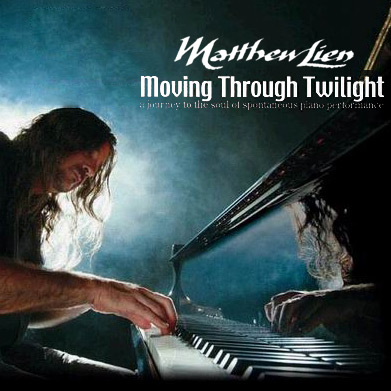 Following the production of several albums in sharp detail, I have developed a desire to create music which is far more abstract and which portrays and conveys more deeply than words and concepts. A photograph requires a subject, and great attention given to objects, lighting and camera settings, while a painting begins as a white canvass whereupon the colours fall as the painter expresses in the moment. Moving Through Twilight endeavours to present music as a painting upon a canvass where you, the listener, are left to derive your own interpretatinn.

It is my hope that Moving Through Twilight will present you with music upon which you may impress your own emotions. and thus embrace it ever more deeply.

The story of Moving Through Twilight

Moving Through Twilight represents the fulfillment of a dream to capture the most intimate and personal moments I have experienced in music. This music flows deeper than any idea I could ever articulate, where the fundamental forces of love, sorrow, longing and hope reside.

Every song within this album was created at the moment of recording and is the result of the inspiration I feel with the piano—no song was composed in advance of recording.

Allowing the music to spontaneously flow through me from the parallel channels of spiritual emotion brings a profound and lasting peace. In sharing this music with you, I hope it will bring you the samepeace as it does me.

From the age of four until I was ten, I possessed a special toy which prepared me for my life ahead; a small plastic organ with a 2-octave range and several push-buttons representing “major” chords and their “seventh” and “minor” variations.

Sitting on the floor playing my toy organ, I explored relationships between various chords and quickly discerned that each chord had a unique personality and relationship with the others. “Major” chords were strong and confident, while “minor” chords were reflecting, lamenting and sometimes tragic. “Sevenths” were restless, while “suspended-fourths” were presenting possible conclusions to the conversation.

My understanding of this chemistry between musical personalities proved invaluable as I ventured farther into the wilderness of music. Without that little toy organ, I simply would not be the person I am today.

A friend comes to visit

As a child, I lived in a humble house with my mother and older sister. We had little money in those days, and our home was small with peeling paint on the outside. But inside, my mother had recreated the warmth of a traditional Bavarian home.

Because money was in short supply, I was surprised when my mother purchased an antique upright piano. Being only ten years old, the piano stood tall before me. It possessed a warm inviting tone, and I was able to play it at once. I played everyday, and this piano and I soon became fast friends. I began playing the songs I heard around me simply from listening, and started composing my own music.

Noticing this natural ability, my mother arranged for a piano teacher to come to our house once a week. After just two weeks, I was dreading those lessons. Reading music notation was like turning music into math—each note represented a value of pitch and meter, placed upon a grid for counting beats. To me, this was the antithesis of music, and the overly simplistic songs being taught further depressed me.

Fearing my frustration could destroy my passion for music, my mother allowed me to find my own way.

Because I opted to teach myself, my relationship with the piano developed naturally. But it required that inspiration be found within the instrument itself. I could not simply recite what I had been taught. Music needed to be inspired by the instrument.

If I was presented with a small piano—with short strings and minimal harp resonance—my creative inspiration could not be found. But with a full-size concert grand piano, the experience was indescribable! Miraculous! With the depressing of the sustain pedal and the striking of the very first note, the piano’s harp breathed deeply and its full-length strings sang with sympathetic vibration. Tears sometimes streamed down my face as I closed my eyes and let the music spontaneously flow through me.

The gift of spontaneous music creation became a necessary tool for my own spiritual and emotional survival. I don’t know if I would have survived my life as a highly sensitive person without such an emotional release.

But this gift did not come without a price—my relationship with the piano has been both a blessing and a burden.

The blessing is obvious.

The burden is because I was rarely able to be alone and intimate with a concert grand piano. And so much of my life has been spent yearning, seeking and sneaking into forbidden places just to be alone with the piano again.