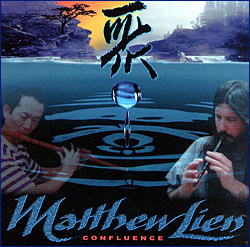 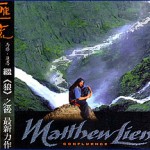 Copyright and Produced
by Matthew Lien 1997

Recorded in China and North America with over 50 musicians, Confluence weaves Chinese, celtic, Cajun, and contemporary influences into a tapestry of passion and sensitivity.

Confluence is a celebration of cultural diversities and similarities. Recorded in Nanjing, China and San Diego, California, this album represents a seamless dialogue between east and west. The music speaks of yearning, introspection, deep emotion and playfulness.

Final recording was completed at Signature Sound in San Diego, with mastering by Bernie Grundman.

Matthew Lien’s Confluence is available in Asia by Wind Records, in Canada at your local music outlet (through Festival Distributors), or by contacting Whispering Willows Records directly.

“It was 1997, the year of the Canadian government’s Canada/Asia Pacific initiative, and funding was available for travel to China. The availability of this funding—which was rather minor in relation to the album’s overall production budget—led to a pivotal phone call. My previous release, Bleeding Wolves, had proven wildly successful in Taiwan, and the time felt right to meet with the folks at Wind Records and explore a new project idea. I wanted to go to China in an effort to create an album that would bring different paths together. Believing that all things happen for a reason, I felt that the success of Bleeding Wolves in Taiwan and the availability of travel funding meant that this was an opportunity I could not fail to take advantage of.

“And so I began an intensive crash course in Chinese traditional music and instruments. I needed to understand scales, tonal compatibility, performance techniques, ornamentations and more. Soon I found myself in the thick of it. I spent eight days getting to know some of the finest traditional performers in China and recording their performances.

“I was very impressed with the musicians and their performances. The challenges of working with a culture so foreign to me had yielded wonderful results, but the project would not be without further challenges. The tape machine in Nanjing damaged the edge of the tape, leaving us without the usual ‘sync’ track. With reels of tape already so full of music, it proved difficult to find spare room for sync code elsewhere on the tape. (Sync code is needed in order for all the equipment in the studio to work together.) This challenge was further complicated by pitch variances, requiring the two 24-track machines to run in vari-pitch mode (something sync code doesn’t particularly care for). It certainly made for an interesting project, but aren’t the greatest results achieved by overcoming the greatest hurdles? I love this album!”