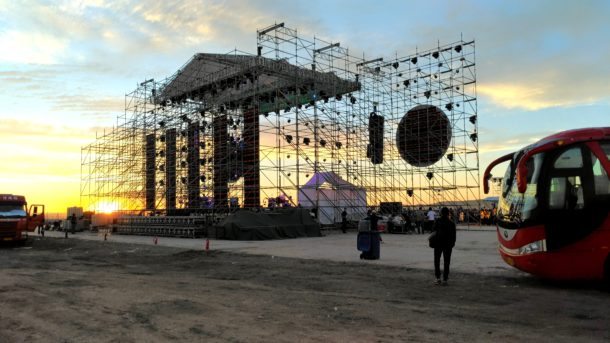 Matthew in concert on the Mongolian Steppe Soundchecking before the concert on the Mongolia grasslands.

Aug 10, 2017 – During Matthew’s trip to Inner Mongolia to shoot the CCTV documentary with legendary horse head fiddle master Chi Bulag, he also performed a concert on the grasslands with his musicians from Taiwan, including Chou Yi-chen on erhu, and Huang Yin-zhong on bamboo flutes. In Matthew’s words: “It was all quite bizarre. When we arrived, there was not a soul around, except for a large encampment of security that looked like a military base. Our dressing rooms consisted of traditional yurts backstage. The location was about two hours by car from the nearest town, and all we could see were the beautiful grasslands rolling away in all directions.” Audience on the grasslands

“About an hour before show time, cars could be seen streaming in from far away, and suddenly the steppe was packed with a passionate audience as an unbelievably beautiful sunset created the backdrop. It’s a show I’ll never forget.”